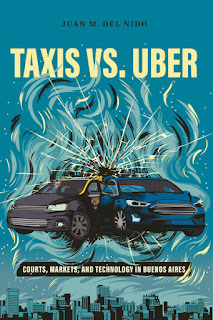 While a classic ethnography situated in place and time of Buenos Aires in the second decade of this century, Juan del Nido’s book, Taxis vs Uber, speaks to a larger global issue that affects all of us and that is the emergence of a digital universe that challenges our imagination much less our ability to engage it critically. Nido argues that conventional political discourse is powerless to fight the gig economy and the new social relations of precarity.  First of all, what is Uber? An app? An algorithm? In the City of Buenos Ares, Uber arrives a “stranger king”, an outsider speaking what Nido calls “gladiatorial truths” about people’s right to choose and the individual’s right to consume, slogans that trump prior political discourse about collective rights and the common good. Uber’s global modernity appeals to the urban middle class anxious to transcend Argentina’s present economic and political stagnation. As of January 2021, Uber and Taxi operate in parallel spaces, both physical and discursive, no loss yet, except the failure to find a common epistemological ground.

To make a donation to the H. Russell Bernard Graduate Student Paper Prize quasi-endowment, please use the following link: https://my.americananthro.org/donatenow?pid=a1B8W00000D3QErUAN.